THE BELOW ARTICLE originating from this Link https://m.lasvegassun.com/news/2021/oct/27/las-vegas-has-not-seen-the-last-of-qanon/ where a LAS VEGAS SUN reporter attempted to seek press credentials yet was denied due to the history of media distorting narratives. I thought the media represented my mission fair and balanced considering they could have put a conflicted spin of conspiracy attached to my speech yet they were straightforward and presented the details as I stated.

Our Family of followers here and on social media has witnessed my journey of 7 years and this is the first press I have received from mainstream media outside of social media. Does this mean we are close to the flood gates opening and giving once blocked voices an opening to finally be uncensored? This did make it into the wire by the associated press. Huge Thank Yous to all who have donated to support my journey as you see the huge hurdles it has taken to get this far so we have to keep my momentum going. We don’t have 7 years for others to break through the matrix. We must keep supporting those who are currently on the front lines and making headways. I will be providing TRUST THE PLAN & BE THE PLAN Tee shirts as one path to help my platform aside from the voluntary contributions from the public ( Patriot Family) who keep me on the front line.

I will be posting my Speech from Las Vegas once it is through post-production on http://www.MAGAINFO.tv, I will be doing a review of the RoundUp on this Thursday’s Nicholas Veniamin Show and will post it to my telegram and my BLOG. Please contact me at my email, gf4justice@yahoo.com, for inquires on Tee Shirts or how to support my platform with contributions. We HAVE TO KEEP THE MOMENTUM GOING! 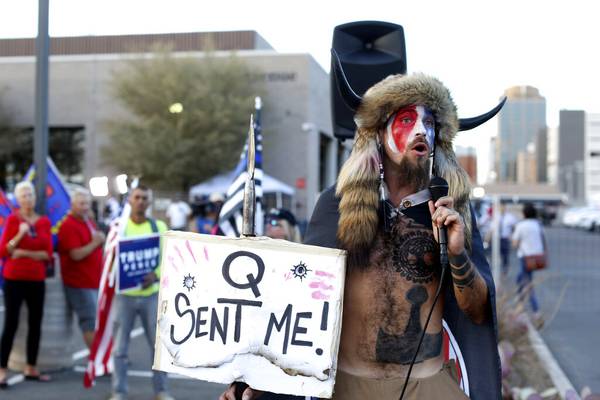 Jacob Anthony Chansley, who also goes by the name Jake Angeli, a QAnon believer, speaks to a crowd of President Donald Trump supporters Nov. 5, 2020, outside of the Maricopa County Recorder’s Office in Phoenix. Chansley was among those arrested for rioting at the Capitol on Jan. 6. He pleaded guilty to a felony on Sept. 3 and could face a maximum of 20 years in prison.

Jim Marchant speaks Nov. 3, 2020, at a Republican election night watch party in Las Vegas. Marchant, who is now running for Nevada secretary of state, spoke over the weekend at the Patriot Double Down event at the Ahern Hotel.

At a four-day convention in Las Vegas attended by far-right conspiracy theorists, speakers passionately spoke about premises such as COVID-19 being introduced by Democrats to ensure that Donald Trump lost reelection.

And they indicated that the “truth” will soon be coming out, and that information will lead to the arrest of Hillary Clinton, Barack Obama and Joe Biden.

The group of QAnon sympathizers and extreme-right figureheads also promoted false claims about voting security in saying the 2020 election was rigged, and spoke against COVID vaccine mandates.

It’s unknown how many people attended at the Ahern Hotel near the Strip, although one media report pegged the number at a few hundred. The Las Vegas Sun applied for credentials to cover the Patriot Double Down, but heard nothing. We instead purchased a live-streaming option Monday for $17.76 to watch the event.

The narratives being spun ranged from being false to potentially criminal.

Take motivational speaker Brett Bohl, also known as Ohio Brett, who announced plans to go back to the Capitol on Jan. 6, which is QAnon adherents’ celebration day, he said. Federal prosecutors charged more than 600 people in more than 40 states with taking part in the riot, where extremist Trump supporters tried to interfere with the certification of Biden’s presidential election victory.

“That is our day,” Bohl said during the convention. “And we’re not going to let evil take us.”

Some members of the Q movement, or the #wwg1wga movement, which means “where we go one, we go all,” believe that evil forces are conspiring to hurt good people, particularly children. They refer to themselves as patriots, brave soldiers who are fighting a secret war against the “deep state” — a secret illuminati that controls national policy.

The convention’s emcee, Andre Popa, wearing a white shirt unbuttoned into a v-neck and white pants with an American flag printed across the right leg, got the audience to chant “USA” and “Let’s go, Brandon,” a phrase that stems from a race car driver but now is a euphemism for “F— Joe Biden,” according to slate.com.

Blogger Alan Fountain, whose speech was apparently focused on “Pedogate,” detailed his traumatic experience as a child victim of molestation. He described how acquaintances were planted in his life to spy on him and how he was secretly rescued by a White Hat Special Forces operation, with a State Department agent inspiring him to follow the “Q drops” — clues from an anonymous internet poster who goes by Q and claims to have high-level security access and knowledge of the inner workings of the so-called deep state.

While it might be easier to ignore this movement that is filled with outlandish conspiracy theories, researchers warn not to underestimate the group.

“We really do need to take them at their word when they tell us what they believe,” said UNLV Ph.D. candidate Nicholas MacMurray, pointing to the events of Jan. 6 as the real-world outcome that the group helped instigate. “This is their understanding of reality. To belittle them and downplay their ideas, I think that’s to the detriment of future events. Isolation is dangerous in that way.”

In 2016, a man fired a rifle in the Comet Ping Pong, a pizza shop in Washington, D.C., that has been targeted as the nest of child-trafficking, because he claimed to be “self-investigating” the baseless online conspiracy, according to NPR.

Members of the QAnon group also have power and influence, either in their positions in government or as media producers with huge followings. For example, conspiracy theorist Ron Watkins, who attended the event and has more than 430,000 followers on his Telegram account, is throwing his hat into an Arizona congressional race.

Arizona state representatives Wendy Rogers, Mark Finchem and Sonny Borrelli, as well as Nevada Secretary of State candidate Jim Marchant, spoke at the convention, calling for “election integrity.” And while some of them may claim not to follow or know about Q and the QAnon movement, they continue to promote some of the same baseless theories.

MacMurray co-authored a piece about QAnon that focused on the entry into the movement, the belief structure and the role that technology plays in the group. He found that membership into groups like QAnon is partly rooted in the distrust of social institutions like media, government, religion and science, MacMurray said.

“If you have this sense that these institutions are working against you,” he said, “it’s an easier next step to believe in the conspiracy of elites that are holding you down and also doing bad things, such as hurting children.“

You might come across something on the internet, such as a podcast or a YouTube video, and then the algorithms kick in and give you more of that content, MacMurray said, feeding into the chaos and the radicalization. Then you discover QAnon influencers who are interpreting these Q drops, he said. There are also people with political agendas who become part of the movement, he said.

What started as a small group looking at these clues being dropped has grown into a subculture, and some would say a new religion, MacMurray said.

Another characteristic of the QAnon movement is an “us vs. them” mentality, which is also common in youth culture in which teenagers rebel against parents, MacMurray said. Members feel they are on the inside of something and feel important. They also feel like they are part of a community.

Many speakers at the convention talked about that sense of community and family they feel through the group and their common cause. It echoed community ties common among religious institutions, as some speakers mentioned the importance of doing good, being kind and loving each other.

“There’s also this feeling of historical significance,” MacMurray said. “You’re involved in major historical events and the rest of the world doesn’t get it. Only you get it.”

MacMurray and his colleagues have compared it to moral panics, such as the satanic panic in the 1980s that had a similar fervor to save the children.

That sentiment was evident at the convention.

One speaker, Jason Frank, spoke candidly about his previous drug addiction and his decision to dedicate his life to God and to “eradicate the evil” of child trafficking. He discussed visiting Comet Ping Pong to “come as close to the source” and come to his own understanding, he said.

“This is the greatest time in history,” he said, adding that he is getting ready to go back to the battlefield. “The scribes are going to write scrolls about this time.”

The belief that evil forces are conspiring to hurt good people is deeply rooted in the human psyche, psychologist Jan-Willem van Prooijen at the Vrije Universiteit Amsterdam wrote in a 2018 NBC News article about the psychology behind QAnon.

“In the dark ages, witch hunts were based on the belief that young women gathered in the woods to conspire with the devil, and many traditional societies still accuse enemy tribes of sorcery to harm or control them,” he wrote.

Distinguishing fact from fiction is going to be increasingly important in order to curb those conspiracy theories, he said. But an added layer comes when there is a denial of fact, which was another common theme throughout the convention. Speakers said throughout the event that they “are the truth” and have their own versions of facts.

So what can be done? Can people come back from those extremes? MacMurray and his colleagues are beginning to look at different deradicalization and “disinformation” projects that have been put forward to combat those false theories. Although he hesitates to call the QAnon movement a cult, there are some parallels that can be studied to help, such as how people have broken away from cults.

“How do you bring somebody back from those beliefs?” he asked. That is something he hopes to learn more about.

This won’t be the last Las Vegas sees of the extremists. The organizers of the convention, John Sabal, or “QAnon John,” and his partner, Amy, announced that there will be another convention in February at Ahern Hotel.

The Arrival Day Video Broadcast with Nicholas Veniamin on the Las Vegas, For God & Country Patriot RoundUp Double Down! The Review of the Event Scheduled for the Nov 4th Broadcast was postponed due to a mild cold & Nicholas mildly under the Weather. Here is the Video the Day the Event Began.

Hello Friends I wanted to send my heartfelt sentiments of appreciation and gratitude for holding my hand through likely the most challenging Global period in Centuries that impacted Every Country on Earth. It would not have been possible for me to escape & survive cabal attacks if not for the support of Patriot Contributions. You are saving my life and hopefully we are close to End Game and Freedom for All.

5 thoughts on “Alan Fountain “The PedoGate Whistleblower” Testimony and Speech Finally Make its Way Into MainStream Print Media After 7 Years of Censoring.”