“ASKING ALL CITIZENS TO JOIN HANDS IN A BIPARTISAN SPIRIT FOR OUR AT RISK GEORGIA YOUTH. A Combined 23% OF BOTH BOYS AND GIRLS WILL EXPERIENCE A SEXUAL PERPETRATOR ASSAULT BEFORE AGE 18”.  by Alan Fountain

President Ronald Reagan with Thomaston, GA hometown native Alan Fountain in May 1989. Mr. Fountain had the honor of being of service to former president Ronald Reagan as an image consultant and custom clothier providing him with formal wear for his June 1989 visit with Her Majesty Queen Elizabeth II where he was Knighted. This experience is what led him to notice eldest son Michael Reagan and his advocacy for Child Molestation issues and ultimately inspired his new direction of Child Abuse and Molestation Activism and Advocacy as an alternative means of healing from a similar path. Mr. Fountain now felt blessed to have a positive role model as an option as for how to inspire others with the story of his survival journey from the aftermath of a serial predator having been molested from age 9-16 by a serial predator athletic coach in Thomaston, GA, from 1972-1979. “Video Clip from the segment I saw with Michael Reagan that affirmed yes one can talk about this in public in the media and it connected the dot’s for the next chapter in my life to be an advocate for voiceless and disenfranchised youth.”

This history of predator molestation abuse and his having been inspired by Michael Reagan’s past and brave path sparked a repressed calling that led him back to GA in 2013 to confront his last remaining demon of which had been many similar to other survivors.

“It was during this three-week-long professional relationship with former President Ronald Reagan in 1989 in Los Angeles, CA that I learned of my diagnosis with an anxiety disorder  and an accompanying battery of other medical conditions resulting from my molestation trauma past that is common among most victims.” Sadly a full circle moment he concluded. “Taking notice of Michael Reagan’s brave story might have ultimately resulted in invigorating my life by inspiring a long-term focus and role model vision as to how to recover and cope with this experience in a positive direction.” It led to his confidence to organize the first known GA grassroots citizen Coalition in April 2014 with a mission to Abolish GA Statute of Limitations (SOL) laws due to this archaic GA law’s direct connection to enabling GA predators to thrive for it’s State’s entire history.

Mr. Fountain vows that molestation reform should be a bipartisan issue and he felt humbled and honored as a Patriot to have the privilege to be of service for Former President Ronald Reagan.   “I was inspired by that his first adopted son and devoted republican Michael Reagan had become a hero to me after his appearance on CNN Piers Morgan show discussing his molestation experience at the hands of a camp counselor”. Protecting voiceless disenfranchised youth is a human rights issue and should and can unite all parties to work closely to change laws expediting solutions. 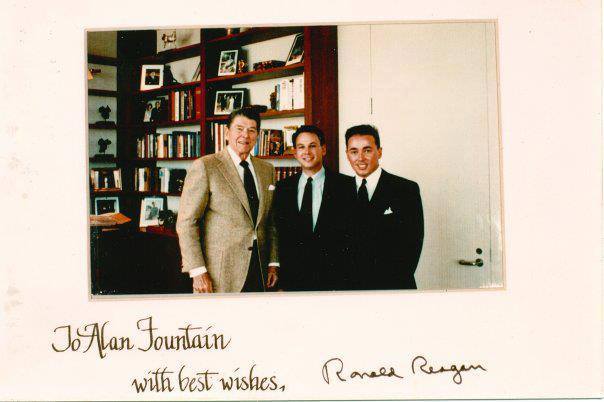